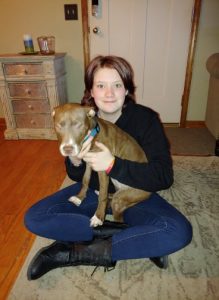 Sounds like Norma Jean (now renamed Luna) is having the time of her life in her forever home!

“She was very timid and shy on the way home, just like she was at your place. Kissing and wagging her tail if prompted, just not jumping around, almost like she was down in the dumps. So we made a plan on the way home as to how we would introduce her to the other 2 dogs (Great Dane and Bulldog). Well, as all plans go, my 13 year old failed and both dogs come running toward me as I had Norma in my arms walking toward the house. The moment the other dogs got close her attitude completely flipped from being down in the dumps to “WOW, I HAVE FRIENDS!!!” She started wagging her tail and licking my face.

Once we got into the house we put 1 of the dogs in the back room and let her meet the Dane. They were running around having a blast. So, we let the Bulldog out and it just kept going. The 3 of them were having a party.

After about 20 minutes of meeting and greeting, Norma and the others pooped out, crawled up on the couch and fell asleep. Norma tucked up against the Bulldog and started snoring. We have put her in the crate each night and she is more than happy with it, as she has not even whimpered. Just wanted to let you know she is having a blast and thanks for all the help.”