Pullo (then Radio while at IndyHumane) was a very special boy who came to us originally as a stray. He ended up staying five long months waiting for his forever home until his patience was much rewarded when adopted by JoAnna and Bill. In this Happy Tail, JoAnna updates us on how both Pullo and the entire family has learned to grow together and enjoy living their best lives side by side.

Grab your tissues and hold your fur babies close, this Happy Tail tugs at all of our heartstrings-

“According to his paperwork, our dog Radio (now called Pullo) was brought to IndyHumane by a good Samaritan one year ago this week. I thought it was a good excuse to send you an update.

He’s really great and we love having him!

I’m so proud of him for all the things he’s learned since coming to live with us – like, playing gently and (mostly) controlling his impulses. Pullo is pure joy and the most hilarious animal I’ve ever met. He runs really fast and we’ve been taking him for bike rides during which he gallops along beside us with his tongue hanging out and the biggest smile on his goofy face. He uses his ears to manipulate me into giving him lots of treats, and he spent all winter on a bed near our woodstove (a dog fantasy I’ve had for years was finally fullfilled!). We’re still learning to be gentle and welcoming of strangers, and sometimes he gets so over excited it’s hard to get his attention, but we’re all adapting and learning every day.

Thank you all so much for taking him in and holding on to him for over four months until we got to meet him. The treats, and especially the harness, you gave us when we adopted him were such a big help in starting our relationship. I’m grateful every day that you took him in, helped him become social, and didn’t give up on him even though he was so often overlooked. I think he’s a pretty happy boy here and we’re very happy to have him.

With so much gratitude,

JoAnna and Bill, and Pullo.” 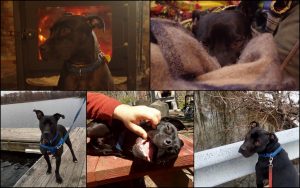