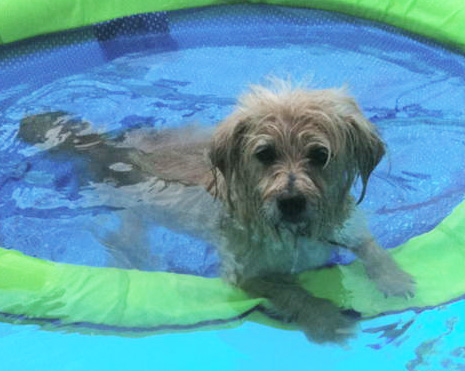 Minnie, a Maltese/Yorkie puppy, was recently adopted from IndyHumane. She’s attended Canine Training School classes, and her new mom volunteers at the shelter, too. Minnie’s mom shares their story:

On a Wednesday night I got off work at 7:30pm and rushed over to the Humane Society, planning on just checking out the shelter. I was quickly infatuated with the puppy in cage 22 of the small dogs and puppy room: a 4-month-old, 6-pound Maltese-Yorkie mix. At the time Minnie had not been spayed and I was told the following day it was possible she would have her surgery. I knew immediately I had to arrive at the Humane Society as early as possible the day she went up for adoption to ensure Minnie became mine. My mom still tells me that Minnie picked me when she got out of her bed to greet only me and ignored everyone else.

On Friday October 23, 2009, Minnie became a new part in our family. At the end of October I began attending obedience training with Rick Doucette. I immediately saw a change in Minnie’s attitude. Rick did wonders to help get Minnie’s hyper Yorkie and puppy attitudes under control. Since I was already at the Humane Society weekly for classes, I decided I wanted to be a part of this wonderful organization and help the animals. In January I became a volunteer in the small dogs and puppy room. After being in the shelter more often I learned more and more how excellent of a shelter the Humane Society is because of all the help and dedication of the employees and volunteers.

While volunteering and attending obedience classes, a new “reality class” was announced. This class was created to help dogs deal with real life situations. I knew with how much help Rick had already been to Minnie and myself that reality class would help Minnie excel even more. Being in Reality class for the summer, obedience class since October, and volunteering since January, I have developed a strong respect for the Humane Society and all that they do.