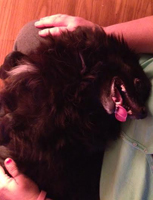 We adopted Miney (also known as Furrmoine) last March. She has been such a joy. She was originally sent to Animal Care and Control by her former owners because she had ingested rat poisoning. She was transferred to IndyHumane, and began treatments to save her life from the poisoning. She was fostered by a kind Vet Tech at IndyHumane so she could receive the around the clock care and attention she needed while healing. March 13, 2013, Miney officially became a part of our family. She’s definitely a Mommy’s girl. She enjoys car rides, playing with toys, and just hanging out with the family. She helps her Mommy, (who is hearing impaired) on a daily basis. She attended her first (but definitely not her last) Mutt Strut last year. I believed when we adopted Miney that we were rescuing her, however, she rescued me.

Thank you, IndyHumane, for all of your hard work and dedication to our furr babies!