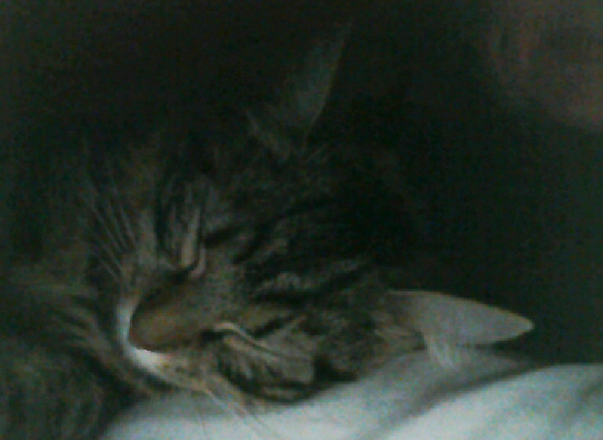 This is Jenni. When we were adopting her, her name was Gladys, and the adoption counselor told us she was shy. When we first got her home, she was a little reluctant to come too close. We already had another kitty from IndyHumane named Crissy, so bringing a shy kitty into a home with a playful kitty wasn't very easy. For a while, she wouldn't even come out to eat. We had to keep the two kittens away from each other, in separate rooms with separate litter boxes for a while. Then after a couple hours of Jenni hiding under the bed, she decided to come up onto it. We came up with a sound that I could make to get her attention and call her. A couple months later, she became my best friend. She comes when I call her, and gets numerous treats when she does. She even comes up to me on her own. One time, she got outside and got dirty, so I had to give her a bath. Though she seemed to hate the water, she wasn't hissing or scratching or meowing. She took the bath like a champ. I could brag about her all day. I'm sharing this story to show my appreciation of what a wonderful kitty you guys have brought into our family. Thanks!