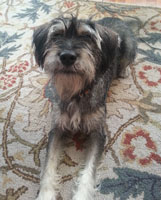 We adopted Cooper (then Huey) when he was about four months old and so full of energy! He adapts so well to any situation – it's no wonder he fit right in with our other dog, Wylie. They fell in love with each other, but we had our concerns. Did we adopt the right dog for us? Is he too much for Wylie? Is he ever just going to LAY DOWN? Eventually, we began to figure each other out, and now we can't imagine life with out our little heathen. I don't know his background or where he started life; all I know is that with a little training and a lot of love, any dog can become just who they were meant to be! He still has so much energy, but we are learning to channel it at the dog park and on long hikes! He is a great camper and loves the trails!

He had been adopted once before he came to us and had been brought back due to a serious allergic reaction. I was told that bringing him back was incredibly hard for them. I hope that if they were ever to read this, they would know that he is very loved.

We make sure everyone knows we adopted from IndyHumane. You all are so kind and your love of the animals in your care is obvious and heartwarming. Thank you for keeping Cooper safe while he waited to come home with us.