Captain is a very good boy who waited for his forever home from August until December of 2019. Enjoy this update from his new family! 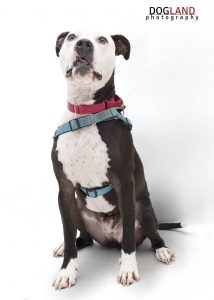 Well, Captain has truly been spoiled with treats. He is great at sitting and paw and even laying down for a treat. Greenies and peanut butter dog cookies seem to be his favorite. He knows the word “cookie” too well.
He enjoys his car rides and walks. He often speeds around the house when he gets back from a walk. He loves to play tug-a-war with his squeaky toy (seems to be the longest lasting one so far).
He enjoys meeting new people. When we come home, he is at the door whining until we get in. Then, it’s jumping up and down, wagging his tail. Sometimes he does a little bark/growl to complain that we were gone at work too long.
His favorite thing to do is rush into the bed after a morning walk, as my wife goes to work later than me. She is his “person”. While he is very loving toward myself and our daughters, he follows her around.
Captain is a very intelligent dog. He uses his paws like little hands when eating.
On a cold day, he will lay at the portable electric heater we have. Sometimes I wonder if he gets too hot, but he doesn’t seem to mind. Rain isn’t his favorite time to go outside. Thanks for allowing us to adopt him.