IndyHumane Puppies take over Halftime at Pacers Vs Magic Game 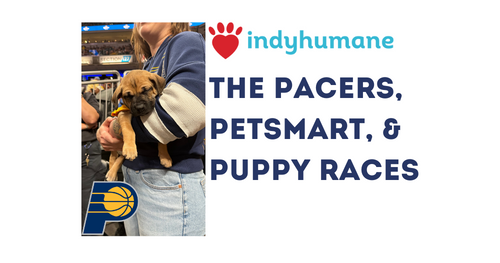 Nine adorable rookies took over the court in a PetSmart Puppy Race on November 21st during halftime of the Indiana Pacers game against the Orlando Magic at Gainbridge Fieldhouse.

“We are thrilled to partner with PetSmart® , PetSmart Charities®, and the NBA to bring joy to the people watching and hopefully find these puppies homes!” says IndyHumane CEO Donna Casamento. “We hope everyone enjoys watching the puppy races and some fans are inspired to adopt.” At least nine people were inspired as each puppy is on hold to go home with a Pacer fan once they are ready to be adopted.

PetSmart®  and PetSmart Charities® work with thousands of animal welfare organizations across the U.S. to bring adoptable pets into stores so they have the best chance possible of finding a forever home. PetSmart Charities® invests in community partners that advocate and care for the well-being of pets and all who love them.

IndyHumane serves approximately 10,000 animals annually, from adoption services to low-cost vaccinations to life-saving surgeries. It is the only shelter in the state with a fully-staffed medical team and surgery suite, allowing the nonprofit organization to care for animals that come to the shelter, as well as animals that need help from other shelters and rescue groups.