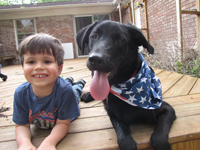 We adopted Teddy (formerly Ethan) from the Humane Society a few months ago, and we feel so lucky! He is exactly what I had hoped for in a family pet. Teddy weighed 29 pounds when we adopted him, and three months later, he's 60 pounds and promises to get bigger. But he's just a gentle sweetheart! He's filled out, learned the rules, and made himself at home! He was super easy to house break, and learns everything so quickly. He will come, sit, lay down, and funnest of all, he will "speak" on command. We heard some scary stories about Labradors being disobedient, hyper, and mischievous, but we really have not had any of those problems. He's high energy when he's outside, ready to run, play, and fetch endlessly. But inside, he's a cuddle bunny who loves to lay snoozing at our feet, or flop across the lap of anyone who happens to be sitting on the floor. We've spoiled him with toys and bones, but mostly with love and attention. Our son TC is 3 1/2 and Teddy (at 7 months) is at about the same age (in people years), so they are perfect for each other.cIn fact, TC calls Teddy his "Best Ever Friend". We have no idea why he was in a rescue or a shelter for the first 5 months of his life, but he must have been waiting especially for us! Thanks!