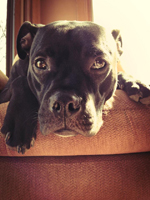 I adopted Rocky, formerly Rocko, from the Humane Society of Indianapolis on July 25, 2012! Rocky was a special-needs dog, because he had a case of demodex on his head and looked just pitiful! When I first visited Rocky, he had been put on the floor, but due to his demodex, he was not yet up for adoption. The adoption center kindly let me take him out into a kennel to play, and when I went to leave he pulled away from the volunteer and tried to follow me inside. Did I mention he looked incredibly pitiful doing this? I immediately knew that I had to have him. For the next week or so, I came to IndyHumane every day at opening to make sure nobody took him before I could. Finally, on July 25th, a week before my 23rd birthday and right after I graduated from Butler University, I got to adopt him! Rocky is the best dog I have ever owned, which says a lot because my family has had many dogs over the years. I am very lucky that Rocky loves to play with other dogs, cats, and children. I am happy to say that he is a great ambassador for his "mixed" or "mutt" breed. After our first year together, I have learned that Rocky has allergies, but I am giving him allergy shots. He hates the rain, has an affinity for expensive cheese, and loves his humans more than anything. Thank you all for finding my best friend, because without your facility Rocky would still be a stray dumpster diving for food.

Thank you again for all that you do!