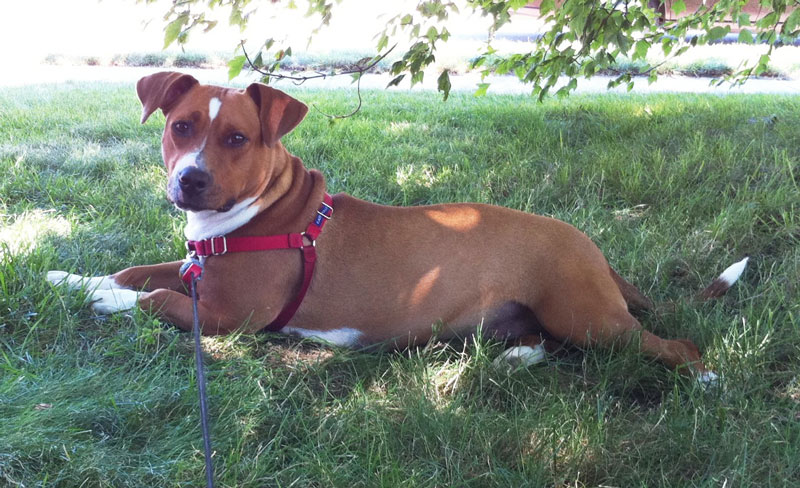 Reba, a Basset Hound/American Pit Bull Terrier mix, was adopted after being sponsored and treated for heartworm at the Humane Society of Indianapolis.

We adopted Reba just two months ago but it’s as if she’s been a member of our family for years. Even though Reba has spent a lot of her young life (she’s just two years old) in shelters, she is so good-natured, well-behaved and loyal, you’d think she’d spent most of her life with a family.

We know that one of the reasons Reba has made such a wonderful addition to our family is because of the good care she received at IndyHumane – Humane Society of Indianapolis”>IndyHumane. When we met Reba she had just completed her treatments and mandatory weeks of rest for heartworms. We want to thank whomever the generous soul was who paid for her heartworm treatment. We want you to know that, by saving Reba, you’ve given our family the gift of a loving pet. We also want you to know that we are keeping her on heartworm preventative and flea and tick medication so she won’t ever have to go through that again.

We were a little concerned about how Reba would acclimate to our three cats (and vice versa!). But we took the introductions very slowly and used lots of crate time. Now everyone is pretty accepting of each other. They lay around in the family room with us without a care.

Thank you for your kind treatment of Reba.