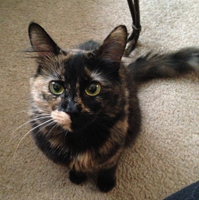 I adopted Miss Mocking-Jay (aka "Debbie Cake") on Saturday, November 16th. She was my birthday gift from my cousin Heather. After I got the itch to get a third Tortoiseshell cat, I started to browse PetFinder. I came across a cat named Debbie, and Pet Finder said she was located at Indianapolis Animal Care and Control. When I called, I was told Debbie had been transferred! The next morning I went to ACC, filled out the papers to find out her transfer information, and patiently waited. The staff told me to have a look at some other torties while I waited, but I had my heart set on finding "Debbie." I still looked, but no other torties compared to her sweet face. When the woman came back, she was able to tell me that she was transferred to IndyHumane! I was so happy, so I looked up the website to see the available cats, and there she was! But instead of "Debbie" she was now "Debbie Cake." I pleaded with my husband to let me get a third tortie, and he finally agreed, so I waited for him to get off work so we could go visit her. We visited her that night and fell in love with her, and my husband said we would come back and get her the following morning. That next morning, I got up super early so we could get there on time, and we got there an hour early just in case there was a line. Now Miss Mocking-Jay has an older sister, Beyonce, who was also a rescue, and a younger sister, Katniss, who was a rescued stray. I now have my Tortie Trio.