December 3, 2019 | Happy Tails,
We received a very happy update on a very special cat, Ellie. Those of you who followed her story may recall that she was originally pulled from Indianapolis Animal Control Services as a working cat.
She developed an upper respiratory infection and became anorectic. IndyHumane medical staff began treating her for the URI and eventually placed a feeding tube. Through it all, Ellie remained very sweet and social with people! Ellie spent time with an amazing foster who took great care of her, feeding tube and all. When Ellie came back to the shelter, she decided she was done with the tube. She removed it herself and began eating! Along the way, Ellie gained quite a following.
She earned the heart of a longtime IndyHumane support who became her champion on social media. And, through that hero’s efforts, Ellie found a home! Ellie is now living the good life! Without the resources IndyHumane was able to provide, Ellie couldn’t be napping like this!
Your support helps us save kitties like Ellie. Help us save even more lives today at IndyHumane.org/Give 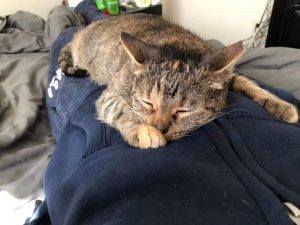