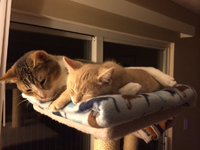 At the beginning of February, our two-year-old cat, Jem, died suddenly and unexpectedly from a congenital heart condition. This left a hole in our home, and our other nearly-two-year-old cat, Scout, missed his playmate and brother terribly. So when my fiancee found Dill’s (formerly Timothy’s) picture on IndyHumane's website that next Thursday morning, we both knew we had to meet him.

In the early afternoon on Friday, which also happened to be Valentine’s Day, in the midst of a small blizzard, my fiancee and I began the trip from Terre Haute to Indianapolis. The drive, which normally takes an hour, took three, as we slowly slid our way east on I-70. Finally arriving at IndyHumane, we saw him sleeping at the front of the building in his cage; minutes later, he was sleeping in my arms, and an hour after that, he was sleeping in my fiancee’s lap as we slowly made our way back home through the then almost-over blizzard.

Within minutes of arriving home, Dill was sprinting around our apartment, and Scout was staring in wide-eyed amazement (and what I’d guess was a bit of terror— he was used to being the little one, after all). Two days later, they were sprinting around the apartment together, and have been ever since.

Dill greets us at the top of the stairs when we come home and follows us from room to room. He meows wildly for treats and plays wildly with the hundreds of cat toys strewn throughout the apartment. He sleeps between us on our bed every night, and I often wake up with his trademark purr as loud as a jet engine in my ear while he lays curled around my head. Even as I type this, he’s sitting next to me on the couch, loudly purring.

All three of us (me, my fiancee, and Scout) love him, and we couldn’t have asked for a more perfect fit for our family.