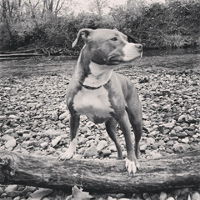 My husband and I adopted Cece (formerly Nakoma) back in November of 2012, when she was 2 1/2 months old, and I felt that I should share her story. Right after we got back from our honeymoon, we decided our house was too quiet, and we brought Cece home. Apparently, she had been taken away from her first home along with 8 other dogs. The staff at the Humane Society didn't have much information on her case other than that she was a part of a "house confiscation," meaning A.) her owners were either abusing or neglecting the dogs, B.) the dogs were being bred to fight or be bait dogs, or C.) the dogs were found in an empty house with no food, water, etc. We will never know what exactly happened to her in the beginning of her life.

At first, we were scared to adopt a pitbull terrier mix, but for some odd reason we were already attached to her before we left IndyHumane. When we brought her to the pet store right after we adopted her, people would want to love on her until we told them what type of dog she was…then they would put her down immediately and want nothing to do with her. We've gotten looks and rude comments for owning her from the start, and we still do to this day. Over the past year, we have really discovered that it is how you train and raise your dog that makes the difference, not the breed! I have never known any breed to be as lovable, cuddly, child friendly, dog friendly, and cat friendly before! It's a good thing we did not purposely adopt her to be a "guard dog," because she welcomes every person into our house! Friends, family, kids, neighbors, plumbers, you name it! She is extremely smart- Cece will sit, stay, lay down, and "zombie" for you if you tell her to ("Zombie" is our term for roll over on your back and stay there). She welcomed an obnoxious kitten named Dexter into our home, and now our 8 month old kitten rules over our now adult pitbull. After adopting one pitbull, it will be hard for us to pick any other breed of dog now. I want to thank all of the staff at the IndyHumane for nursing her back to health before we adopted her, as well as the team member who reassured us that Cece would be a great dog after lots of love, training, and positive reinforcement.