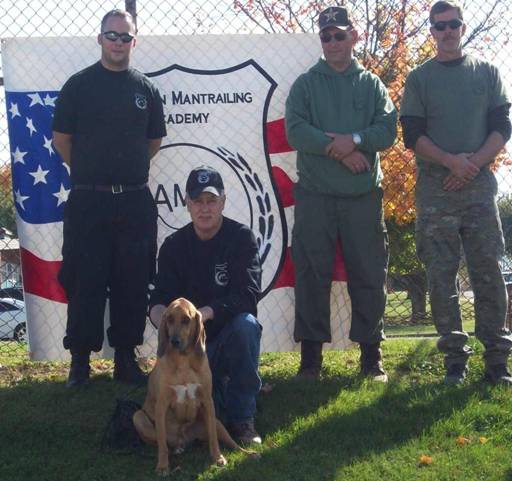 Bogey, a Bloodhound/Beagle mix, was rescued from IndyHumane and went on to learn how to rescue others.

On Christmas Eve 2005, I lost my best friend.  He was a 16 year old Wire Fox Terrier named Buddy.  At first, the idea of getting another dog just didn’t seem right.  But after a few months, I found myself going to the IndyHumane website on a regular basis to see what new dogs were up for adoption.

In July 2006, I happened to notice a litter of Bloodhound/Beagle mix puppies just listed.  One in particular caught my eye, his name was Urchin (We call him Bogey).  The next day my wife and I made a trip to IndyHumane.  Everyone there was so helpful and friendly.  They answered all our questions and we decided to adopt him on the spot. We brought him home and everything went great.  He was so easy to housebreak and he got along great with his two sisters, Heidi (a miniature poodle) and Tabatha (a black cat, also from IndyHumane).

One day while watching TV, a program came on about search and rescue dogs.  It showed how these dogs were used for finding missing persons, tracking down criminals and much more.  It was amazing.  I wondered if Bogey could do this.  So, I did a little research and decided to give it a try.  I bought a book on mantrailing and began working with Bogey.  Bogey really seemed to enjoy it and so did I.  The book was good, but I knew it would be much better to get some hands on training from real experts.

So, I went to the internet and found the American Mantrailing Academy.  They are located in Greencastle, Indiana, just a short drive from Indianapolis.  They provide free training twice a month to Police, Fire Departments, Search & Rescue Teams, and AMA members.  I contacted them to see if it was okay to come out to one of the training sessions.  They said sure.  I went and found their help to be just what I needed.  It was a lot of fun too.  So, I joined up.  At a cost of only $30 a year, it was a real bargain.  I continued going to their training sessions twice a month and practicing at home as well.  Finally, on October 7, 2009, Bogey and I certified as an Expert Mantrailing Team.  We will be registered in a national database and will be available for search and rescue assistance whenever we are needed.

He is a great companion and a great Search & Rescue Partner.  IndyHumane rescued Bogey.  Now, Bogey can rescue others.