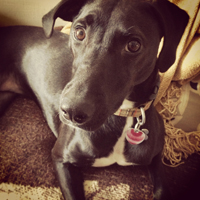 A year ago we adopted the biggest ball of energy the state of Indiana has seen: Lilly. Since then, she has turned two (and mellowed out some), completed obedience training, won an agility contest, and has caught the attention of every person who has passed her by. She has the longest, skinniest legs, and a body made for speed. Although we aren’t quite sure what kind of dog she is (we were told Pointer), we are certain that she has some sort of Whippet in her because this…dog…can…run. When we go to the dog park, everyone points at her, and dogs desperately try to outrun her, with no success. She constantly needs to be where you are, and we have rarely seen her sit as she is afraid she will be missing something, whether it be a dropped tortilla chip or a squirrel a half a block away. All in all, she has the sweetest heart and loves every person with her entire being. We are lucky to have found her, and I hope that she feels the same way. Though, if I had to guess by the amount in which she is spoiled, I would say she does.
Megan & Fred